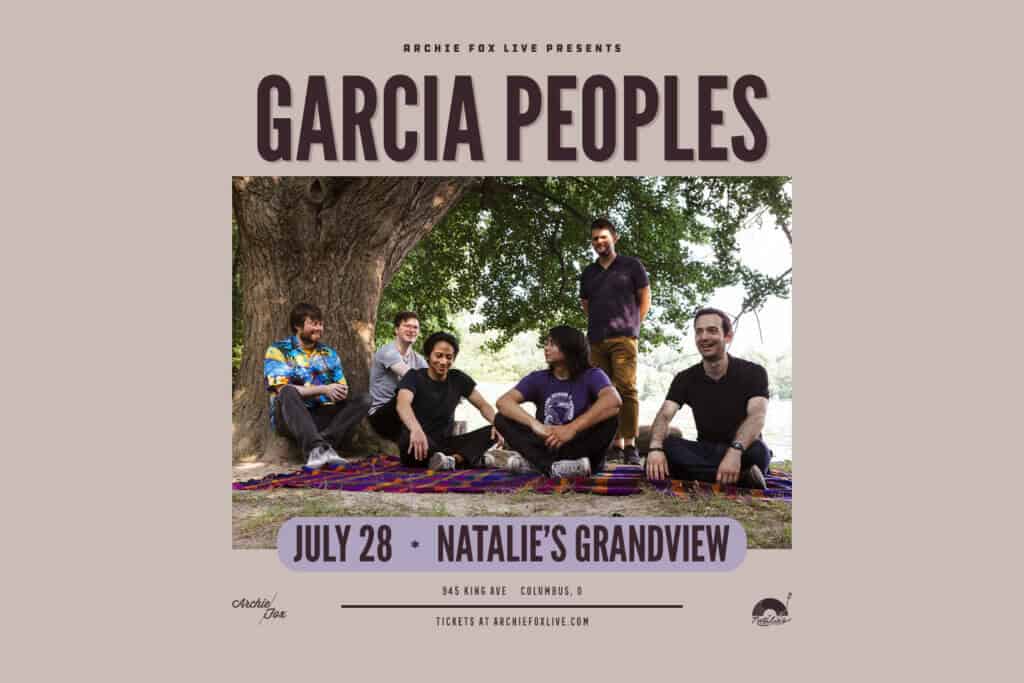 Formed in New Jersey by guitarists Tom Malach and Danny Arakaki, the band took a few years to find their flying shape, solidifying into a lineup with Danny’s brother Cesar on drums and Derek Spaldo on bass by mid-2016. Ramping up their acceleration around the time of their 2018 Cosmic Cash debut on Beyond Beyond Is Beyond Records, they’ve blasted through residencies and new songs and sessions and collaborations, relocating to New York, picking up two new members in keyboardist/multi-instrumentalist Pat Gubler and bassist Andy Cush, and leaving a trail of live tapes in their wake. This year, they’ve delivered not one but two new albums for BBiB: the sleek and song-oriented Natural Facts and the sprawling improvisatory opus of One Step Behind. 2019 also saw the first performances by the full Garcia Peoples lineup, a six-person behemoth with Spaldo on third guitar.

With a stash of live recordings accumulating at the Live Music Archive, Garcia Peoples’ music is very much a living entity. Since the release of their previous two albums, songs have started to expand, jam suites have grown, and experiments have been undertaken. The first part of 2019 has seen Garcia Peoples back Philadelphia guitarist Chris Forsyth (an expanded Solar Peoples Band has hit double-drummer overdrive several times now), and joined with guitarist Ryley Walker. They’ve improvised on WFMU, and jammed with the sounds of ocean waves and falling rain at strange late night happenings. Probably something else new and wonderful and weird has happened in the Garciaverse since I wrote this.

Whether or not you thought you knew Garcia Peoples’ music, One Step Behind is something new and beautiful, for new heads and old. No matter where you stand–behind, beyond, or another plane altogether–One Step Behind is ready. For those about to get on the Bus, we salute you.

A limited food menu as well as our full bar will be available during the show–if you would like to order from our full menu we encourage you to make a reservation for our dining room by calling us during business hours at (614) 436-2625!