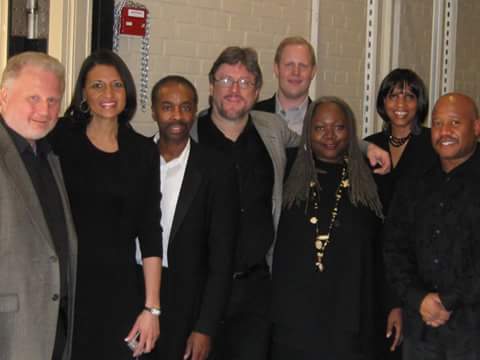 Natalie’s presents a very special tribute to the music of Ray Charles, featuring Roger Hines and a full band of talented musicians. Roger began his association with Ray Charles in 1980 when he began six years of full-time recording and touring the world exclusively as bassist to Ray Charles.

“Traveling with Ray taught me how to make music the most important part of my day.” says Hines. “I remember playing 6 or 7 nights a week in a different city and many times a different country and being exhausted but always getting energized each night playing music that was honest, intense and full of emotions.”

Such musical inspiration as well as his close personal relationship with “The Genius of Soul” was the impetus for his formation of a band which celebrates the soul, spirit and genius of Ray Charles. Featured in the group are Hines (bass), James “Smooth” Elliot (drums), Vernon Hairston (piano/vocals), Jon Eshelman (piano), Randy Mather (saxophone), Dwight Adams (trumpet) and “Raelettes” Debra James Tucker, Tia Harris Roseboro and Vicki Saunders (vocals).