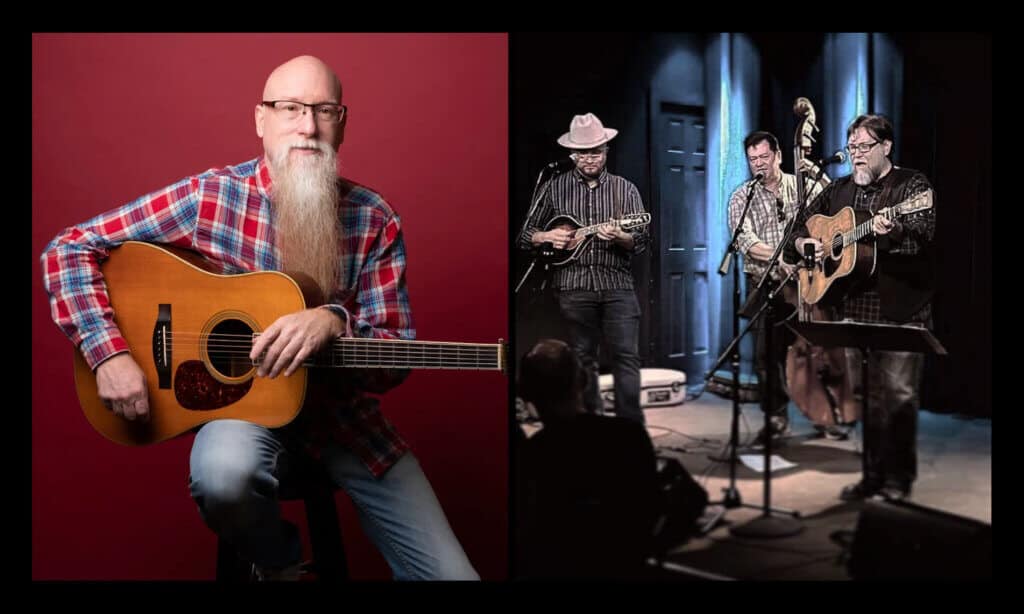 Appalachian Swing and David Grier, along with special guest Chase Potter, join forces for an engaging night of music! Appalachian Swing is an exciting new band that took their name from the Kentucky Colonels iconic album. David Grier is one of the greatest flatpicking guitarists in the world, and violinist/composer Chase Potter is accomplished in multiple genres including power pop, indie rock and experimental music.

Appalachian Swing, featuring Adam Schlenker (guitar), Hayes Griffin (Mandolin), Todd Sams (banjo) and George Welling (bass) is a band that is building its sound around the Kentucky Colonels brand of bluegrass, and has wowed area audiences with their energy and amazing musicianship.

David Grier’s journey has included touring and recording with established acts such as “The Country Gazette” and International Bluegrass Music Association (IBMA) Hall of Famer, Doug Dillard. In 1988, David began recording a series of critically acclaimed solo albums for the Rounder Records label that pushed him to the forefront of the Bluegrass scene and brought him three IBMA Guitar Player of the Year awards. In 2000, David was recognized by Acoustic Guitar Magazine as one of the “Artists of the Decade” and he has played on four Grammy Award-winning albums.

Chase Potter started his music career just shy of five years old on the violin, and it wasn’t long after when he began absorbing other instruments.  Potter’s musical prowess would lead to a distinction unlike any other: a full ride to the Berklee College of Music.  In New York City, Potter dove head first into the city’s vibrant music scene as a multi-instrumentalist. His musical opportunities were ample and distinguished—perhaps most notably as a featured violin soloist with Wynton Marsalis at the Lincoln Center and he found himself in front of the camera performing violin on The Tonight Show with Machine Gun Kelly and Camila Cabello, as well as a fictional guitar player on the season finale of HBO’s The Deuce. Chase Potter’s mission has always remained simple and steadfast: be true and vigilant through the power of music.