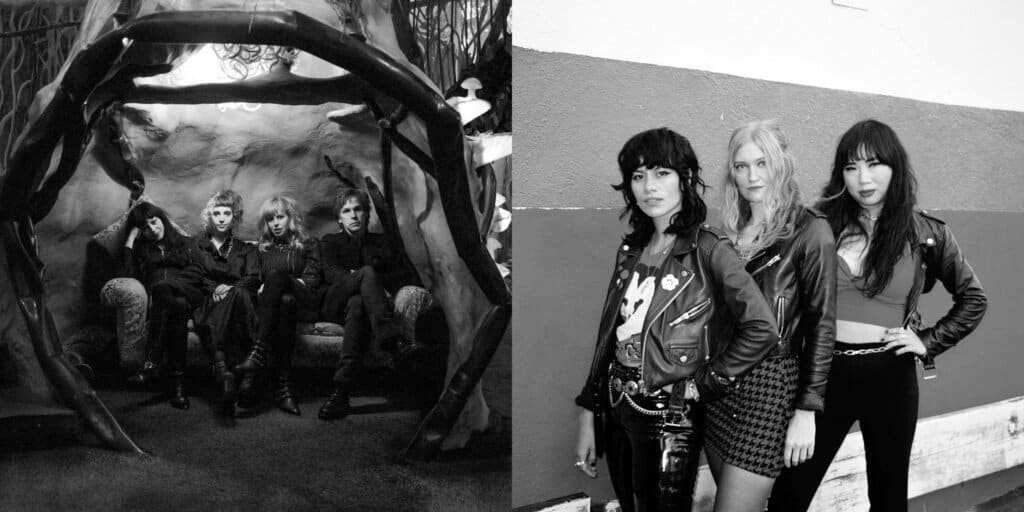 The group feels less like a band and more like a travelling caravan. At their core, vocalist/multi-instrumentalist Bonnie Bloomgarden and guitarist Larry Schemel channel Death Valley Girls’ modern spin on Fun House’s sonic exorcisms, early ZZ Top’s desert-blasted riffage, and Sabbath’s occult menace. Their relentless touring schedule means that the remainder of the group is rounded out by whichever like-minded compatriots can get in the van. On their third album Darkness Rains, bassist Alana Amram, drummer Laura Harris, and a rotating cast of guests like Shannon Lay, The Kid (Laura Kelsey) and members of The Make Up, The Shivas, and Moaning help elevate the band from their rogue beginnings to a communal ritualistic musical force. On the surface level, Death Valley Girls churn out the hypercharged, in the red, scuzzy rock every generation yearns for, but there is a more subversive force percolating beneath the surface that imbues the band with an exhilarating cosmic energy.

L.A. Witch’s self-titled debut album unfurled like hazy memories of late night revelries in the city center creeping back in on a hungover Sunday morning. Guitarist/vocalist Sade Sanchez purred and crooned over jangling guitar chords, painting pictures of urban exploits, old American haunts, and private escapades with a master’s austerity. Bassist Irita Pai and drummer Ellie English polished the patina of the band’s vintage sound, adding a full-bodied thump and intoxicating swing to the album’s dusty ballads, ominous invitations, and sultry rock songs. The album had an air of effortlessness, like these songs were written into the fabric of the Western landscape by some past generation and conjured into our modern world by three powerful conduits. The band readily admits that L.A. Witch was a casual affair and that the songs came together over the course of several years. That natural flow hit a snag when the band’s popularity grew and they began touring regularly, so a new strategy became necessary for their sophomore album, the swaggering and beguiling Play With Fire.