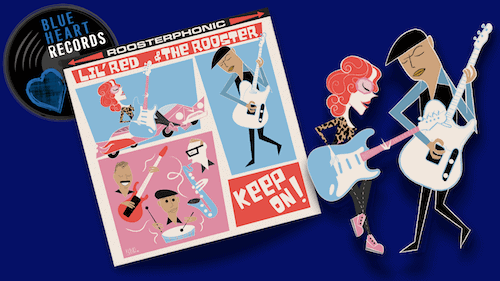 Jump-up and shake a tail feather, or two, ‘cause Lil’ Red & The Rooster will roll out some smooth retro modern Blues just for you. Intimately real and at times hilarious they exude a contagious charm that guarantees you’ll feel good no matter how haunting the melody or biting the message. They’re a sassy, smokin’, bone tremblin’ slow-burn Blues balm.

This is release night for their new album, “Keep On!” on Blue Heart Records. Jen “Lil’ Red” Milligan and Pascal “Rooster” Fouquet are joined by Columbus Blues Hall of Fame inductee Dwight Cartier on bass and Antoine Fatout on drums and David Gastel on keys and harmonica along with some very special surprise guests.

This international dynamic duo has been touring around the world together since 2010. This year they were at the prestigious Cognac Blues Passion in France, Heritage Music Blues Festival as well as Beautiful Swamp Blues featuring Dave Specter. They appeared on Songs at the Center, were finalists in the International Blues Challenge and can be found often at Buddy Guy’s Legends in Chicago.

Lil’ Red, born in Columbus, Ohio in the late 60’s, grew up loving Hollywood movie musicals especially Bojangles, Gene Kelly, Louis Armstrong, Ella Fitzgerald and the Nicolas Brothers. Rhythm and groove have always been her deep love. She studied everything in the arts: music, dance, acting, writing, painting, martial arts and meditation. She graduated from Fort Hayes Performing Arts High School for theater, holds a BFA in Musical Theatre from the Cincinnati Conservatory of Music and an MFA in Contemporary Performance from Naropa University.

In the musicals, Hair and Jesus Christ Superstar, she toured the US, Canada and Europe working with magnificent performers like Ted Neeley, Carl Anderson, Denis DeYoung and LaChance. Master jazz dance teacher, Luigi took her under his wing as her NYC Papa and for over twenty-seven years she studied the flow and grace of this man who danced in the films with Gene Kelly. Always a carefree soul, Lil’ Red has lived a life of adventures and challenges, all of which go into her lyrics and presence on stage. She cares deeply about humanity and believes as an artist she has a responsibility to do her part to shape the culture we live in. Here’s how she works … “mix what’s pissing you off with some bounce and swing, sprinkle a pinch of Blue notes and bend it all together on six strings and you’re guaranteed a feel good satisfaction.”