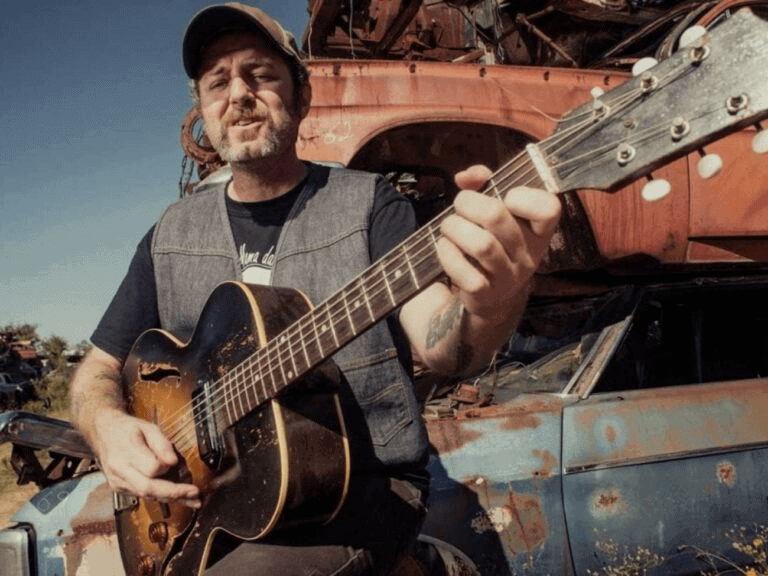 Scott H. Biram unleashes a fervent display of conviction through, not only the genuine blues, classic country, bluegrass, and rock n roll, but he seals the deal with punk, heavy metal, and frankly, anything else he wants to. He’s The Dirty Old One Man Band. He will still the room with haunting South Texas blues, then turn it upside down, into a truck driver’s mosh pit. Like he says, it might be baptism, or it might be murder, either way…you gonna see the light.

This legally ordained preacher’s singing, yodeling, growling, leering and brash preachin’ and hollerin’ is accompanied by sloppy riffs, and licks literally yanked, one at a time, out of his collection of crusty, worn out, Gibson hollowbody guitars, and battle axes. All this held down with a pounding backbeat brought forth by his amplified left foot, and self customed stomp board. The remainder of this brutally charming one-man band consists of an unwieldy combination of beat-up amplifiers and old microphones strung together by a tangled mess of guitar cables. Don’t get too close! You gonna get some grease on ya!

Years of compulsive touring, along with a steady diet of down and dirty blues, rock, punk, country, and hillbilly have developed Scott H. Biram’s signature concoction, attracting a hefty array of fans who dig the bizarre and twisted sides of the rock and roll spectrum. His live shows, performed all over the world, deliver a take no prisoners attitude, a stomping, pulsing John Lee Hooker-channeling, and cockeyed tales of black water baptisms and murder, all while romanticizing the on-the-road lifestyle.