Tinder Live! With Lane Moore (To Be Rescheduled) 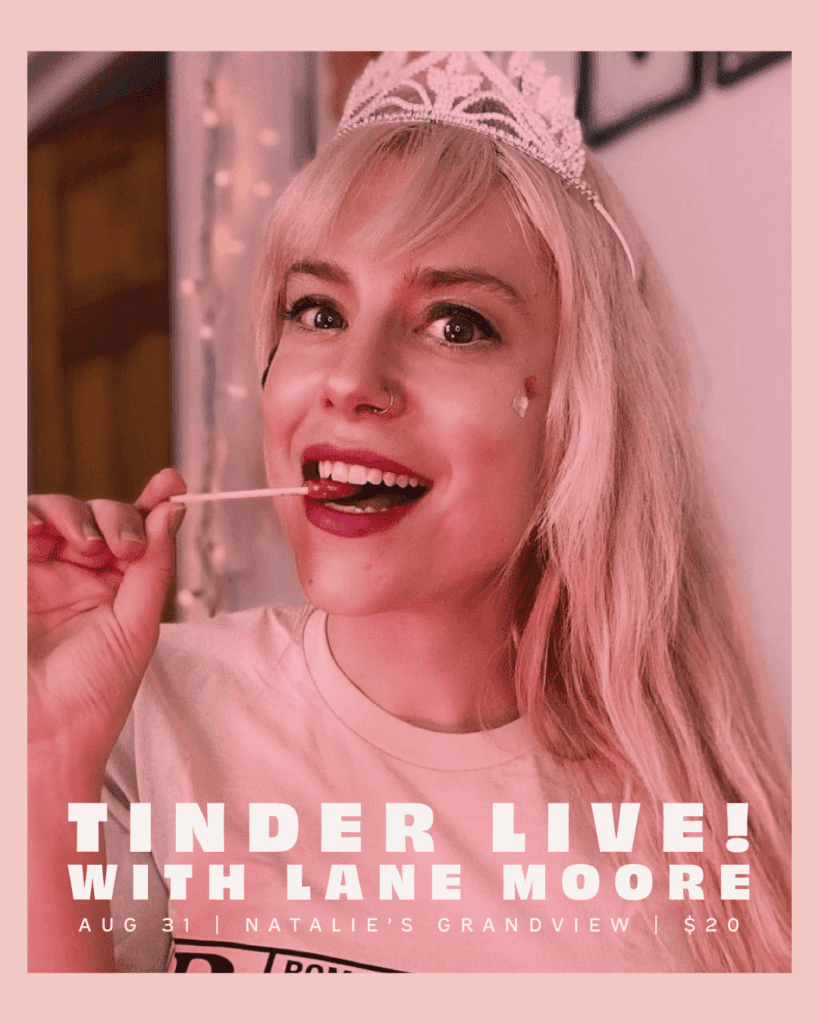 Due to circumstances beyond our control, this show has been postponed to a later date to be determined as soon as possible. All ticket holders will be issued full refunds, and we apologize for any inconvenience.

Lane Moore is an award-winning comedian, actor, writer, and musician based in New York City. Her comedy show “Tinder Live!” is regarded as one of the best comedy shows in NYC and has been praised by The New York Times, Entertainment Tonight, CBS, The Atlantic, Time Out New York, and New York Magazine. She has a monthly sold-out residency in NYC, and also tours rock venues and colleges worldwide.

Her first book, How To Be Alone: If You Want To And Even If You Don’t became a #1 bestseller and was praised as one of the best books of the year and she also gave a TEDx Talk based on the book, called How To Be Alone. As an actor, Moore plays Kelsey on HBO’s “Search Party,” and had a memorable role on season 5 of  HBO’s Girls, for which The New York Times called her performance “wonderful.” She frequently appears on Comedy Central, VH1, MTV, truTV, and IFC.

As a musician, Moore is the frontperson and songwriter in the band “It Was Romance,” which BUST Magazine named the Best Band of 2015, and Billboard named one of 16 Female-Fronted Bands You Should Know. She is a prolific writer for The Onion, The New Yorker Shouts and Murmurs, The Washington Post, Teen Vogue, InStyle, McSweeney’s, GQ, Glamour, and Playboy. In her time as the the Sex and Relationships Editor at Cosmopolitan, she won a GLAAD award for her groundbreaking work championing diverse, inclusive coverage.

Moore created popular blog Male Feminists of Tinder, which New York Magazine called “brilliant…a perfect snapshot of a particular, awkward moment in culture and technology.” BuzzFeed called it “a gift” and Cosmopolitan called it “hilarious…drop-dead funny.”  Moore hosts the live streaming comedy show How To Be Alone on Twitch. Fast Company described the show as, “Moore has both the whip-smart performance background of a seasoned comic and the rough-hewn wisdom of a self-help author, it’s a show that she’s uniquely suited to host.”